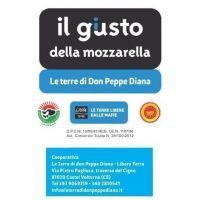 G (i) usto of Mozzarella

Help with work to give the right value to the product that Caserta is world famous and offer other responsible citizens experience social reuse of goods confiscated through a cooperative true that can involve other healthy economic and social actors of the territory.

The Libera Terra project becomes concrete brand and product, which reaches the citizen, making him share and convinces him to a conscious consumption, to an enforcement action against the mafia in the purchase and distribution of values ​​that a product like mozzarella can express through "the G (i) usto of Mozzarella".

The presence of the Camorra in the buffalo sector has caused a pollution of the production chain of buffalo mozzarella, both in terms of product quality both in terms of the production process legality. On a confiscated property of Castel Volturno, belonged to the boss Michele Zaza, was born in September 2010, thanks to the signing of a memorandum of understanding and the consequent spread of a public announcement, the first cooperative Libera Terra in Campania, with ' goal of transforming a place of ill repute in a place of healthy products, first dairy in Campania built on a property confiscated from the mafia and who devotes the fruit of their work to Don Peppe Diana, the priest who never bowed his head before the mafia violence until the day he was cowardly murdered in his church of Casal di Principe, 19 March 1994.

Mozzarella di Bufala Campana "The G (i) usto of Mozzarella" produced by the cooperative dairy "The Land of Don Peppe Diana - Libera Terra" owns brands such as: work only natural milk and certified, in accordance with the process of craftsmanship working in a factory powered by clean energy, constantly attentive to the safety of food products, reasoning in terms of quality and not quantity, in respect of absolute quality excellence; to better express the organoleptic characteristics as described by the protected designation of origin the product specification "Mozzarella di Bufala Campana" has the following characteristics:

Chosen by the following BG's

Supplier of BG registered in E-circles.org