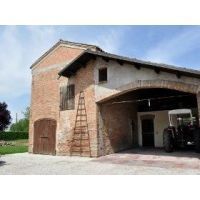 The rural background "Pontino" is in Gradizza of Copparo fraction. The notarial deed is dated July 25, 1958, the day which Massimo paternal grandparents, Silvio Giuseppe Caramori and Renata Malerba, concluded the purchase. The fund was mainly planted in apples and pears, but also cultivated a little 'everything to support the family and community needs.

His grandfather Joseph was also a breeder, had stables with dairy cows, calves, horses, and a hundred sheep, so even the "Pontine" there were cows, a donkey and poultry because, according to the then peasant culture, in every rural site there had to be animal (as a stable and poultry) for the life of the fund. In 1983, following the death of grandparents, succeeded by inheritance the seven children, two of whom Harold (father of Massimo) and Bruno (the uncle) being farmers, they decide to buy the fund liquidating the five brothers. In 1988, Bruno sells his share to his father Massimo who unfortunately fails sometime later. For reasons testamentary Caramori Massimo in 1991 became the owner of the fund (officially only at the end of 2005 when the last installment of the loan is paid to the father was about to take the engagement). The fund in the meantime, for technical and economic reasons had been cleared of any orchard so giving room for cereal crops and rented until the end of 2005.

In 2009 starts with a plantation of Actinidia (kiwi) varieties Hayward for about 3000 square meters, around 310 plants (male and female).

In 2011 he realized another facility than a hundred cherry trees and hundred-bearing plants a bit ' "out of fashion" (old varieties) but very resistant to disease in general.

In 2013 starts with a plantation of Actinidia (kiwi) varieties Soreli.

Chosen by the following BG's

Supplier of BG registered in E-circles.org

Certifications from other organizations and Network participations

Fondo Rurale Pontino self-certifies the above informations. E-circles at the time had not yet verified the veracity of the information published in this section.